Depending on the flow regime pressure head loss vary as the behavior of the fluid changes. Example of turbulent flow regime in a pipe section:

Friction and viscosity of the fluid causes difference of velocity, according to the distance of the walls of the pipes. The speed variation generates turbulence and losses.

flow Regimes in a pipe: 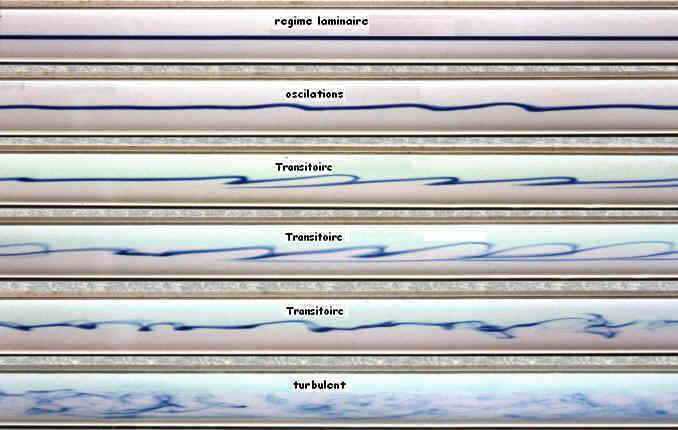 To date no equation can fully assess the pressure drop whatever the type of flow. it is therefore necessary to determine the flow regime to choose the equation that is suitable for calculation of the coefficient of losses.

The flow regimes vary according to:

The flow regime is given by the Reynolds number: Re

These values ​​of Reynolds transition are approximate,because transitions are gradual and can be activated by irregularities of surface states.

the flow regime in the ducts is determined, depending on your settings of pipes: roughness, flow, diameter...:

Frictional forces also depend on the flow regime, the regime of laminar to turbulent varies depending on the distance to the leading edge.

We distinguish a critical distance (x critic) at which the transition between laminar and turbulent occurs. the boundary layer thickness varies depending on the flow regime and the distance from the leading edge.

With Mecaflux standard, the Regime of flow on a plate is determined using the detailed study of a plate. you can evaluate the thickness of the boundary layer, the critical distance transition of laminar flow to turbulent, depending on the fluid velocity and surface roughness of your choice. 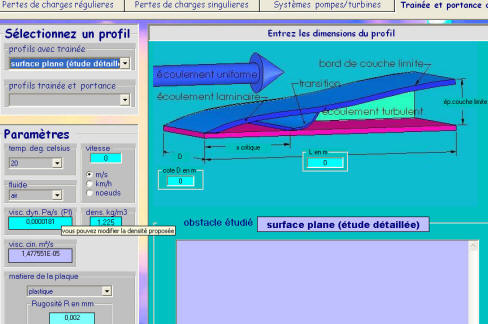 See also: boundary layer on the aerodynamic and hydrodynamic profiles