For an object to stop, taking a speed of 1 meters per second per second,At the end of the second second, the object will have a speed of (1m/s x 2) =2 m/s

This equation is implemented with a few representative examples of acceleration and deceleration (accident, elevator..),in the mass and acceleration tab of the converter included in mecaflux.

on earth this acceleration is 9.81m/s² at poles and 9.78m/s² at the equator (effect ofthe centrifugal force)

on the moon that acceleration is 1.62m/s²

Representative examples of the effects of gravity (accident, elevator..),in the mass and acceleration tab of the converter included in mecaflux.

Consider an object whose path is a curve, the force which tends to move away the object from the center is the centrifugal force

These two forces are equal and opposite because they are action and reaction. One does not exist without the other

In a narrowing tube, the acceleration of the fluid is related to a pressure loss. This is the Bernoulli effect or Venturi effect

If the tube narrows between point A and point B :

The continuity equation gives us a speed increase, due to the narrowing of the section as: 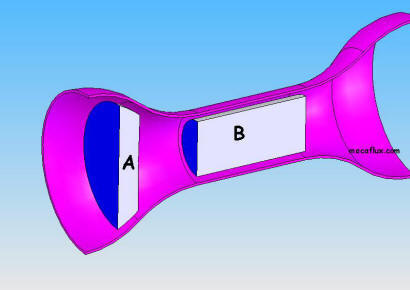 Bernoulli's equation links the pressure and the speed:(we assume the horizontal tube, not to take account of changes in height).

substituting (velocity point B) by [(Section A)/(Section B)x(Velocity A)] we get:

if we know the pressure drop and the sections of the tubes we can deduce the velocity at A:

Knowing the speed of A we can deduce the speed at B by the continuity equation mentioned above.

if we know the speed and the sections of the tubes we can deduce the pressure drop..

Mecaflux standard comes with a converter, with functions related to acceleration..