The phenomenon of Ventilation in hydrodynamic. (for ventilation and suction or industrial aeraulic is rather this page: ventilation suction aeraulic)

Any system of hydrodynamic profiles, moving near the surface tends to suffer from the air intake.This phenomenon is generally called ventilation. 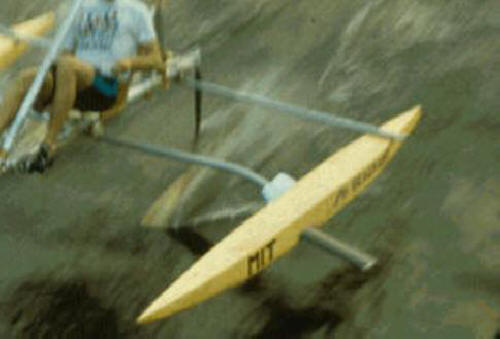 The result is a sudden loss of profile's lift . If the air supply is limited, or if that is sucked in a short period of time, a simple transient bubble is formed on the dorsal surface of the profile and is stored in the wake

A much more serious situation occurs when air can enter without interruption.This has often been a problem in the development of hydrofoils mounted on a hollow base, including systems for varying the incidence tends to provide a path for air.

In all profiles evolving near surface air can leak in the down , one solution is to install plates making dams, or a decrease the suction depression by increasing the area of action of the lift (chords of wider profiles)

Problems similar breakdowns, can be found in the pumping, the suction is too close to the surface, A vortex appears and the air is sucked in the pump....

Lift force of a hydrofoil with mecaflux software